Last week the Rajya Sabha passed a private member’s bill of historical importance which provides a comprehensive rights framework for transgender persons in India. This is a victory of staggering magnitude — not only was it voted in unanimously, it is also the first time in 46 years that a private member’s bill has been passed.

For this legislation to truly achieve its potential, Lok Sabha needs to proceed in a manner that is as consultative as possible. This is a historic moment for a “minuscule minority”. Let the government make it count.

Net Neutrality: Save the Internet

By Prashant Jain There has been a buzz around Net Neutrality and its implications on mobile internet users. As the issue is very important for Indian mobile users especially youth, there is a need to correctly understand the issue and take steps to fight back. To do all this, what is better than an AIB […]
Read More »

A victory for Internet freedom

The beauty of the Internet is that it is a truly open and democratic platform that does not discriminate – it does not care whether you are impoverished or a social outcaste and gives your voice equal weightage. We must attempt to increase the access to Internet so that it offers a voice to those in perpetual exile from our consciousness and enables them to influence public opinion. At the same time, we must also endeavour to maintain its open nature.

A Nation Ashamed of Itself!!

By Vishu Mahajan “You can’t clap with one hand, it takes two hands. A decent girl won’t roam around at 9 o’clock at night. A girl is far more responsible for rape than a boy. A boy and a girl are not equal. Housework and housekeeping is for girls, not roaming in discos and bars […]
Read More » 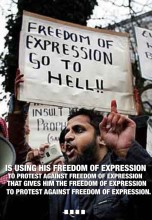 The Right to not be offended: A satirical take